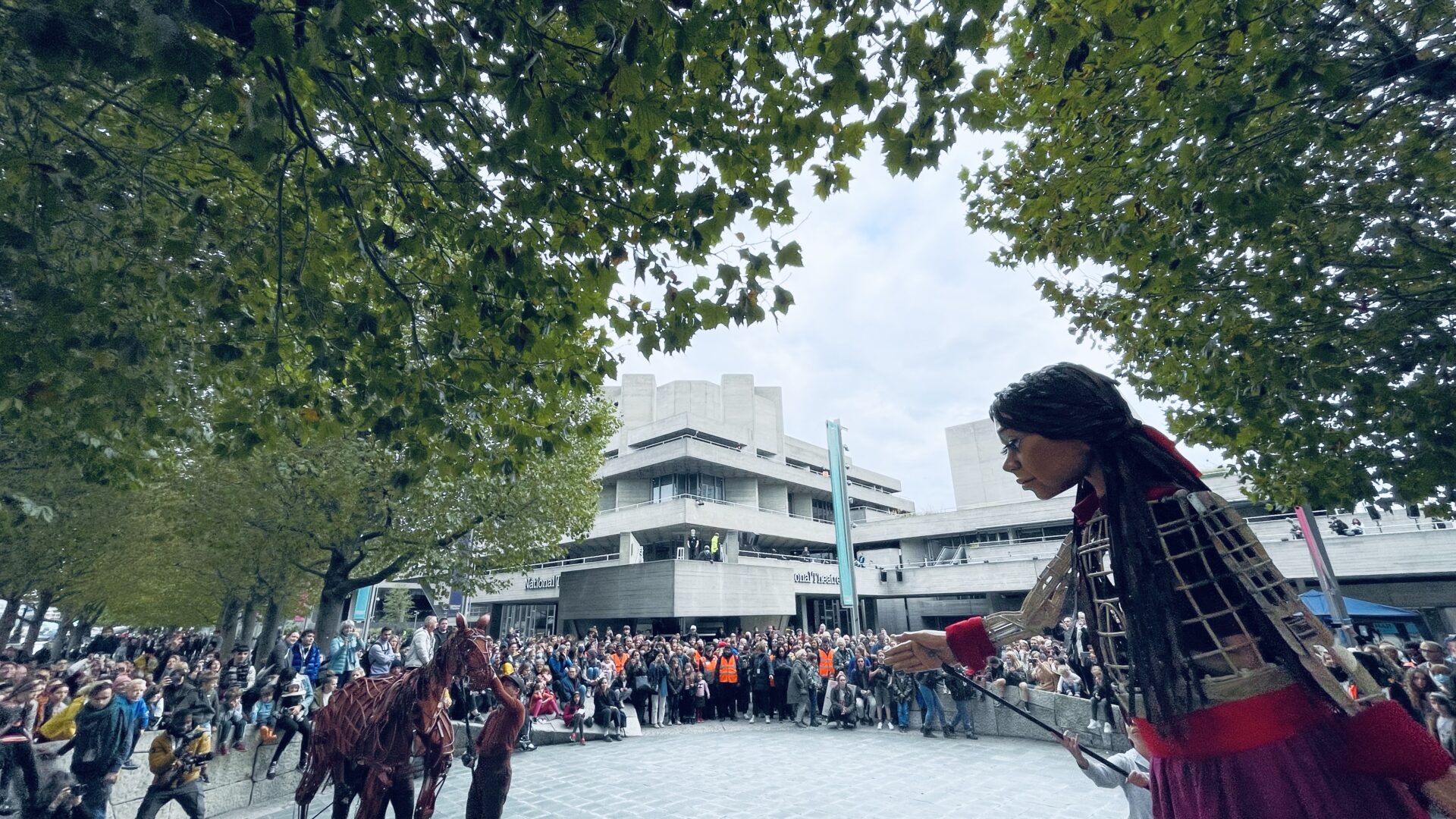 Little Amal arrived yesterday, 23 October, in London. She arrived in the morning outside St Paul’s cathedral. I was there amazed by the participation of citizens of any age who welcomed this young refugee who travelled long way from Gaziantep near the Turkey-Syria border. Amal have already been through seven other countries in Europe to finish her journey in the UK.

Little Amal is basically the main character of a muppet theatre street show. The story of a nine-year old Syrian girl is simple in its conception. Little Amal is searching for her mother, who went off to find food and never returned back when we were in Syria. She is fleeing the war in her country in search for her mother. In a few words, little Amal represents all displaced children who have left their homes, towns and villages and/or have been separated from their families.

At a symbolic level, the place to call home for Amal is going to be England from now on. UK is the country where she will stop her long journey (next month in Manchester). I do not know (although hope) if the UK is a welcoming place for refugees, asylum-seekers or immigrants today. I cannot also comment whether UK will become home to displaced children, like Amal. Children make up less than one third of the global population, but almost half among the world’s refugees were children in 2020. According to UNICEF, today, nearly 1 in 3 children living outside their countries of birth are child refugees, when the same proportion for adults is less than 1 in 20. Children and families are the victims of a humanitarian crisis that touches countries in continuous wars (Middle East), those affected by climate change (Africa, Latin America), countries suffering from acts of authoritarian regimes within them (Afganistan) or next to their borders (Mexico).

Amal’s journey and arrival in London are reminding us of this humanitarian crisis. Amal’s presence on the streets of London also shows the power of community arts movements to raise societal issues in the attention of public along with conflicts and debates. I am aware, for example, of the fear little Aman caused to many in the countries she passed in the last months. For example, she was not greeted with open arms in my origin country, Greece. Far-right protesters threw things at her as she walked through the streets, local councillors voted to ban her from visiting their towns, her route in Athens faced many obstacles caused by protesters. On some streets of Greece and other European countries, we simply hurt again this girl (and so many other children and families) with these acts of fear and hostility. We might not heal some of the trauma that she and other refugee children have suffered in their countries. But we can stop to traumatise again children who are only looking for safety and a place to call home.

My body yesterday at St Paul’s Cathedral was celebrating her warm arrival in London, but when Amal came closer to where we were standing, my mind travelled to Greece for a while. In these seconds, I felt sad for little Amal as well as for so many other refugee children, so many refugees, asylum-seekers and immigrants like me for the way they were treated in many countries. My memory also went to the decision of my birth-place in Greece (Karpenissi) last Spring to decline the host of 40 refugee children and families (108 persons in total) from Afganistan in a governmental call for help. My sadness and some anger did not last. So many people around me signing and celebrating, the open doors of St Paul’s Cathedral, the voices of children and the presence of so many families there were fuelling my heart with hope.

Little Amal made me feel hopeful as the real meaning of her name. Amal means hope in Arabic. At a time of unprecedented global movements and changes, she made me feel hopeful because art has united people, families and communities and brought about a shared sense of humanism. People have the right to move to find shelter, create new homes and feel safety. We are the agents and products of our history, arts are there to remind us and unite us transcending borders and politics and telling new stories of shared humanity. Some will not feel this shared humanity, but this does not stop us to care for those who leave their homes to live with integrity and safety. Refugees and immigrants in the countries and societies where they shelter and create new lives have more to say and share, like little Amal and so many others in the history of humanity.

Skip back to main navigation